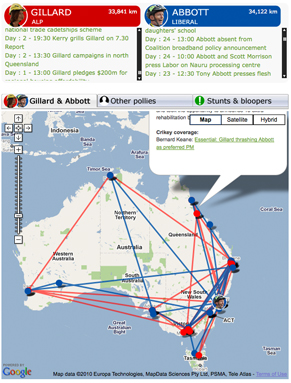 Who will win the 2010 election? Tony Abbott or Julia Gillard? Who has travelled the most during the election campaign, and where have they been? Which pollie has pulled the most stunts and bloopers?

You'll find the answers to all these questions and more in the Crikey 2010 Election Tracker which Alltraders developed in conjunction with our Melbourne development partner, Valegro.

We had to work fast too! The day before Kevin Rudd was ousted, we were on a plane from Adelaide to Melbourne to discuss the project brief with both Valegro and Crikey, knowing that an election was looming, but more likely to be towards the latter part of the year. Little did we know that Julia had bigger ideas and was planning an election, a very early one! We are proud to say the election tracker went live on time, on budget the weekend the election was announced.

If you're interested in the tech details, we wrote a WordPress plugin, using the PHP programming language, the Google Maps API and MySQL as the database. We developed a back end management system allowing Crikey to enter where each politician was travelling from/to or they could select the locations from a Google map of Australia. The system automatically calculated the distances travelled (shown above in the red and blue titles in the image). A WYSIWYG (What-You-See-Is-What-You-Get) editor allowed entry of text and images which appeared when the location/entry was clicked by the user.

All in all, it was a very interesting project, and we'd like to thank the Crikey team and Pieter Coetzee at Valegro for the opportunity to showcase our development talents.